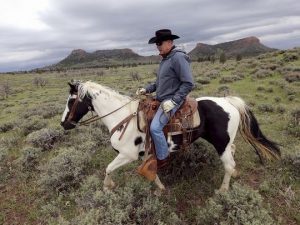 U.S. Interior Secretary Ryan Zinke’s first year in office was a whirlwind of activity and controversy, with plenty of both centered in New Mexico.

President Donald Trump appointed the former Navy Seal and Republican congressman from Montana as interior secretary in late 2016, handing him responsibility for a vast federal portfolio that includes the National Park Service, Bureau of Indian Affairs and the U.S. Fish and Wildlife Service. Interior’s Bureau of Land Management is responsible for 13 million acres of public land in New Mexico alone, according to the Las Cruces Sun-News.

If it all seems daunting, the perpetually upbeat Zinke doesn’t let it show.

“I love my job,” Zinke declared last week during an interview in his office, which boasts jaw-dropping views of the Washington Monument and National Mall. “I’m passionate about public lands.”

On his first day on the job — clad in jeans and a black cowboy hat— Zinke rode a U.S. Park police horse to his swearing-in. He continued to make splashy news throughout the year, whether it was for his plans to reorganize the Interior Department and slash its workforce by as many as 4,000 employees, his stated intent to open more federal lands to both oil drilling and recreation, or his admonishing a national park superintendent for tweets about climate change.

No issue loomed larger in the interior secretary’s first year in office than his contentious and controversial review of 27 national monuments for possible downsizing or other changes. Two of those monuments — Organ Mountains-Desert Peaks National Monument near Las Cruces and Rio Grande del Norte National Monument near Taos — became a national rallying cry for land conservationists. Zinke spent two days in New Mexico in late July meeting with public officials and others, and even took a horseback ride with the state’s two Democratic U.S. senators.